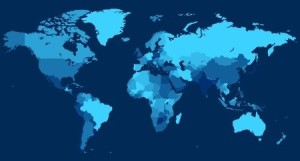 You’ve done your due diligence.  You have selected the countries where your company has a solid business opportunity; you’ve picked out your products and services; you’ve designed your web site and made sure that the colors in the design won’t offend anyone; you’ve rewritten the copy into the appropriate language(s) and made sure it doesn’t sound like a robot translated it.

But you’re not showing up on the local search engines.  What the…heck?

Optimizing your site for international SEO is different.  Just because your company’s US web site is showing up at the top of Google’s organic search results doesn’t mean it’s going to do the same thing in the UK, Germany, France, New Zealand or Botswana.  To make sure you get off on the right foot, here are just a few of the things that need to be taken into consideration before that shiny new site goes global.

Every country around the world has their own country code. (Domain Sherpa has an excellent list). Because local search engines tend to favor local web sites when determining which sites to show in their search results, one of the first things a company needs to do before deploying an international web site is to secure your domain name using the local code for each country.

Once you’ve selected and registered your domain name with the appropriate country code, it’s time to think about hosting.

Brazil and the United States are examples of countries with only one official language, but many countries around the world – including Canada – have two official languages.  Some, like Belgium, have three (Dutch, German and French).  And those are just the official languages.  So a lot of Brands take the path of least resistance (read: cheapest).  They register their domain in that country, host the site locally but put content on it that’s written in English.

While a large percentage of the population in almost all industrialized countries speaks English, it is a bad idea to create locally hosted versions of your domain where the content is written in English.  OK, maybe it’s not a bad idea, but it isn’t a good idea.  Why? Again, because all other things being equal, the search engines will almost always give less authority and relevancy to sites that written in the local language.  But this can present some challenges when it comes to your site architecture and SEO.

So, what’s the best way to handle that?

Plan A: The most common solution is to use the language designations for the different versions and put the content written in each language into that language’s folder.  Using Belgium as an example, the directory structure for this web site would look be:

Plan B: There are situations when setting up country specific TLD’s (as recommended above) isn’t possible.  As mentioned above, this can be because the TLDs are unavailable or because the content management system used by the web site won’t support that option.  In that case, one of the most common workarounds is to create country and language specific versions of the web site off the root of the main web site.   Using this scenario, if we go back to the example above (using Belgium), the URL structure would look like this:

Plan B isn’t as effective as Plan A, but sometimes you don’t have a choice.

META data isn’t something that’s going to be “seen” by people – it’s there for the search engines.    Adding some additional location specific META tags to the HTML templates won’t help your web site rank better if your content is thin or irrelevant, but it will help to surface your content when the user is searching for a product or service in a specific geographic area.  These are the tags with some examples:

It should go without saying that your target keywords for international SEO – and indeed your entire content strategy – must be localized and, if possible, done by someone who resides in-country.  While it’s certainly possible to find people residing in the United States who are completely fluent in other languages, nothing beats a translation done by people who are in-country.  Knowing how people search for things in a local market is something that only a local resource can provide.